Help us spread the word! 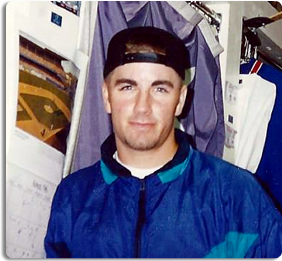 Tattoos: None at the time

Keith was out with friends the night of May 10th, 1997, when he was dropped off at his residence, the Fountaingate Apartments, located in Wichita Falls, TX. He was last seen walking up the stairs to his apartment around 11:45 p.m. Earlier in the evening, Keith had indicated that he was meeting someone at 12:15 a.m. (That person has not come forward with any further information.)

Keith was working as a car salesman for Ron Roberts Ford at the time of his disappearance and was scheduled to deliver a car he had recently sold. He was expecting to receive two paychecks on Monday, May 12th.

He was driving a dealership owned car (red 1996 Ford Mustang) during the weekend. The Mustang was later found abandoned near his family's home in the 4300 block of McNiel Avenue, also in Wichita Falls, TX. The trunk of the car was left partially open, for reasons unknown.

All personal belongings were left behind, including money in his savings account and unclaimed paychecks. Foul play is suspected.